Nature of the assessment

Teacher-devised extension activity for a small group of able students

Purpose of the assessment

To see if the students could make predictions and describe the patterns and relationships in a diverse ecosystem in a challenging context, and explain the role of the scientist

Stage in the teaching sequence

At the end of term following a series of lessons

The teacher chose the context for the task based on the students’ interest in wildlife and wildlife conservation. He gave them the following worksheet. The teacher introduced the task and drew diagrams to help the students understand the movements of the native animals during a wildfire and during a controlled fire. He also showed them images of the land after a wildfire and after a controlled burn.

The students discussed the questions in their group.

Feral cats kill at least 2 million native animals every day in northern Australia alone. They have already contributed to the extinction of many native mammals in central and southern Australia. Scientists have caught feral cats and put tracking devices on them. 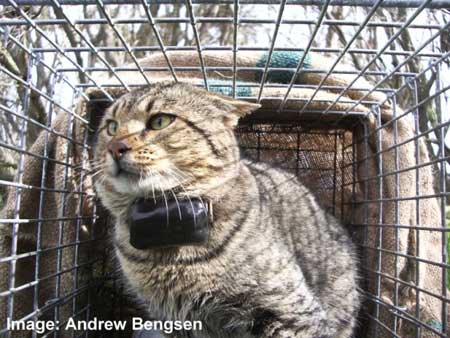 The scientists have then released the cats back into the wild and tracked their movements.  The scientists have found that some of the cats change their hunting behaviour when there is a wild or uncontrolled fire. These cats travel long distances to hunt where the wildfire has just burnt the ground. The scientists have also observed that when the cats get to the fire zone they kill very many animals, far more than they normally would. 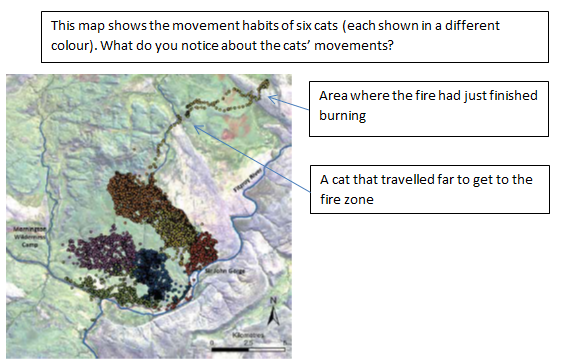 The scientists have also studied what happens when land managers do small controlled burns and burn only small patches of land leaving large patches of unburnt vegetation. This work has shown that the cats do not travel to the site of controlled burns.

The scientists are trying to work out why the cats take the risk of travelling far to be close to a wildfire and why they don’t travel to a controlled burn.

The teacher listened to some of the group discussion and posed questions to check the understanding of individual students. As a result, he noted that the students had been able to adequately explain the relationship between the cat’s movements and the wildfires. The students could explain why the scientists had tagged and released the cats but they struggled to explain how this work might contribute to the conservation of wildlife. As a result of this assessment the teacher planned further extension work for the group particularly in relation to science as human endeavour.